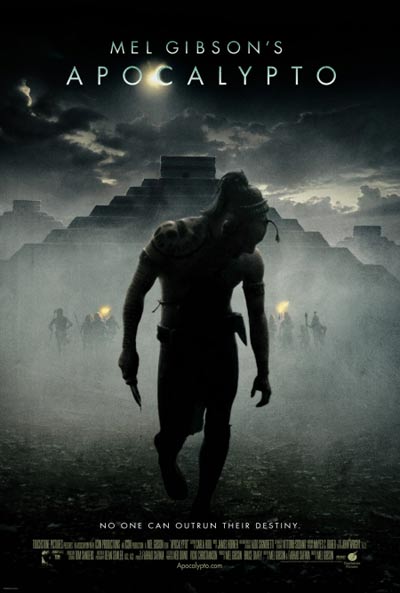 A 1001 Films review. Mel Gibson, whatever you think of him, is certainly not short of ambition and daring. In this film, made in 2006, he takes us to the world of the ancient Mayans, told completely in their ancient language with subtitles, with a cast of unknown and ordinary-looking actors (in our day of ultra-glamorous movie stars).

It’s the kind of mad spectacle that early silent film makers would have dreamt up, and the plot is definitely straight out of those old days. A peaceful tribe lives in the jungle until their idyllic life is shattered by a marauding band of invaders from far away. The invading tribe drag off all the men to an unknown but gruesome fate. However, one of them, Jaguar Paw, is desperate to escape to find his wife and son – trapped down a pit.

This is quite melodramatic stuff, but what makes it work well is the sense of motion of the whole thing. There is the motion of the camera, which is constantly moving and providing a steady stream of eye-engaging visuals. But there is a distinct rhythm to the film itself. We start in the jungle, amongst primitive tribesman, in what could be almost any time or age. It could have been 50 years ago, it could have been 5,000 years ago.

But when the tribesmen are captured, they begin their journey towards the city that has captured them. And things get decidedly more savage and vicious the closer they get to civilisation. What is Gibson trying to say? That things are much purer out in the primitive jungle? That cities corrupt us? I have no idea, but it is this journey from the jungle to the city, and then back again, that drives the film and keeps us hooked all the way through.

I don’t know if it provides any new insights into life (though it does tell us a lot about Mayan culture), but – like the old silent melodramas – it’ll provide a diverting couple of hours’ entertainment.