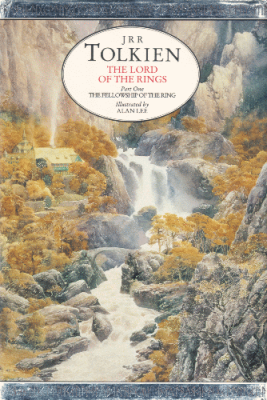 This is my second read-through of The Lord of the Rings. My first was just before the Peter Jackson films came out, and so I was racing through the books trying to finish each one before the film came out. If you’d asked me back then, I would have said that it was a bit like trying to read a fantasy adventure crossed with the King James Bible. Quite slow and ponderous. I mean, what was Tolkien doing? He’d take two pages to describe the landscape, then when the action came, it’d be over in two paragraphs!

But now that I’m back to reading it again, I’m a little bit more understanding of what he is doing. I also made a point of reading a couple of the Appendices first, rather than waiting till the end. If you approach his story armed with a knowledge of the history and background of the place, then his story comes alive – he really is giving us a zoomed-in view of a year in Middle Earth – an eventful year, but one that is part of a much broader sweep of history that has gone before it.

I think that’s what I missed the first time. I wanted action and adventure and for the story to get to the end. (And if you want that, the Jackson films have cleverly recrafted the story to provide all this.) However, what Tolkien provides is a much different experience. In real time, almost, day by day, he is recounting what happened to his characters and he will not be rushed. He is not interested in where the story is going, but the journey itself. Thus, the landscape and the history are important to what he is doing.

So if you take a deep breath and read it slowly, the richness of the world starts to come alive. (And I can’t help but wonder how strange this would have been to the original readers.) We’re kind of used to having hundreds of fantasy worlds, all with maps in the front of the books, strange names and their own rules. But I’m not sure how many of those existed when Lord of the Rings was first created.

The theme that seems to recur most often in the first book (apart from impending doom) is this feeling of ancient civilisations disappearing, to be replaced by new ones. Was this something Tolkien saw happening in England (a country where many ancient civilizations have settled and mixed together)? I don’t think we’ll ever know completely, and that’s probably okay. Will look forward to seeing how the other two volumes hold up.

3 thoughts on “Book Review: The Fellowship of the Ring (JRR Tolkien)”