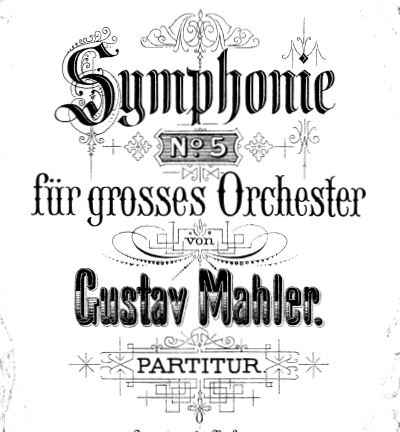 I had originally planned to jump straight into Movement I of the Mahler 5 but the introductory couple of paragraphs I intended to write blew out to a blog post on its own. So this is the introduction to the symphony itself. Movement I will be up in a couple of days.

You don’t need a lot of background to listen to this music, but to give you an idea of how old it is, this symphony was first performed in 1904, and was written over the previous two years by Mahler on his holidays. Mahler, at the time, was director of the Vienna Court Opera, and was more famous as a conductor than anything else. He would spend most of the year conducting operas, but when the opera season was on break, in summer, he would sit down and start composing his massive symphonies.

Knowing that Mahler was a conductor helps explain the way Mahler wrote music for orchestra. I don’t claim to be an expert on conducting, but a good conductor has an ear for what kind of sounds can be made by particular instruments, how those different sounds combine an how to get a good balance of sound. And Mahler seemed to have an extraordinary ear for it, because in almost any of his movements, one of the first striking features worth pointing out on a guided tour is how clearly each instrument’s voice stands out.
This doesn’t always happen in writing for orchestra. In a lot of music, the instruments blur together to form a sound more like a large choir. But not so with Mahler. At nearly any point, you can listen and pick out what each group of instruments is doing. The end result is that the music sounds incredibly rich and complex (in a good way), because layer upon layer of sound is added in to form the whole. It’s like looking at the inside of a clock – you can see each cog and wheel moving but all of those individual pieces add up to the movement of the clock hands.

Now, while I don’t want to get super-technical straight out of the gate, it is also worth knowing something about movements in a symphony and what audiences expected. Most works of classical music from the 19th century (and especially symphonies) are broken into sections called movements. The easiest way to think of this is like courses in a meal.
Most three-course meals have an entrée, a main and a dessert. But what is entertaining for the diner (and hopefully for the chef) is that there is an infinite variety of types of entrées, mains and desserts. But nonetheless, we kind of know what type of food would count as a main, compared with a dessert. So while we know each course will vary depending on the restaurant and chef, nonetheless, we can have a certain expectation of what we expect the food to taste like.
Movements in symphonies in the 19th century worked in largely the same way. By the time Mahler came along, the audience generally expected that a symphony would have four movements:
1) A fast movement to start with
2) A slow movement (to calm things down and contrast with the first movement)
3) A quirky movement called a scherzo (Italian for “joke”) which was faster, but still a bit light and not as heavy as the first and last movements
4) A fast movement to end with
Movements 2) and 3) can often be swapped around, but generally those four movements were what an audience expected to get from a symphony by the end of the 19th century.

However, the Mahler 5 – just to be different – has five movements. There are a couple of ways you can think about it. In one sense, you could call it a regular four-movement symphony with a bonus funeral march thrown in at the beginning. But most people, and Mahler himself, describe it as being in three parts.
Part 1 contains the first two movements – Movement I, one of the most elegant funeral marches ever created and Movement II, a wild, chaotic whirlwind of emotion with just a hint of the Light Side at the end. Essentially, these two movements form the Dark Side of the symphony, the heavy stuff, the bad beginning.
Part 2 is the Scherzo in the middle – the longest Scherzo ever written, and it’s the hinge or the fulcrum, as David Hurwitz puts it, that tips the mood balance of the piece from dark to light.
Part 3 is the last two movements. It is the Light Side, the beautiful stuff, the happy ending.
Overall, the symphony is not particularly about anything, but there are some musical ideas in this symphony that pop up in nearly all of Mahler’s symphonies. But I’ll point them out as we go. See you in a few days!