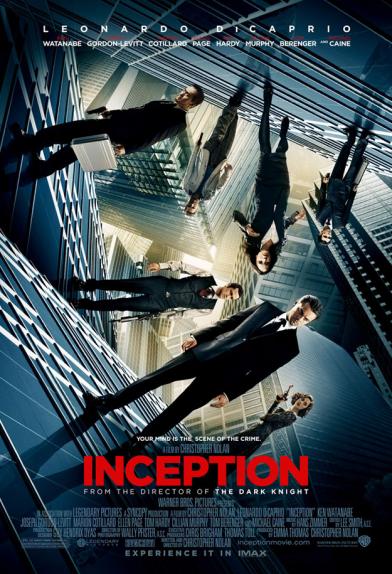 Director Christopher Nolan is somewhat of a rarity nowadays – a director who can make films that appeal to both the average popcorn filmgoer and more serious buffs at the same time. You’d think this could be done more often – but sadly, we tend to have to choose between blockbusters that are huge and mindless (Transformers 2, anyone?) or thinking films made on a smaller budget. So you usually have to make a choice between spectacle and mental engagement.

Nolan is really a case of being a good steward in small things and you will be rewarded. When his film Memento was released 10 years ago, he showed us that with a very small budget and only three actors, it was possible to make a really taut, and clever thriller. When Nolan moved to bigger budget films, such as Batman Begins, you might have thought that he would have sold out to Hollywood and just pocketed the money – but no! His Batman Begins was a hugely exciting and fresh approach to the Batman franchise, but nothing could have prepared anyone for the riveting brilliance of The Dark Knight (especially when seen in its IMAX version). (And I won’t go into them, but Insomnia and The Prestige, his other two films between Memento and Inception are also brilliant as well.)

Inception is an original story by Nolan (as far as I can tell), and it is original in every sense of the word. While it is full of elements that are familiar from many other films of varying genres, like a masterchef, Nolan combines them into a story that’s quite different from anything else I’ve seen. All I’m going to tell you about the plot is that it concerns Leonardo diCaprio as Cobb, a master of extraction – the art of sneaking into someone’s dreams and stealing private information from them. (Like corporate information, etc.) His offsider in these enterprises is Arthur, played by Joseph Gordon-Levitt – I’ve never heard of this actor before, but he looks freakily like Heath Ledger, so I can’t help wondering whether Ledger was originally in mind for this role.

After a semi-successful extraction at the beginning of the film, Cobb then gets offered the job of inception – instead of stealing an idea from the subconscious, can he plant an idea there? To say any more would be absolutely criminal, but from here, the film turns into a mixture of a heist film, a Bond action film, a Matrix-style action film – but all completely different from these other films. But if you want action, a unbelievably clever plot, and an emotional pay-off, this is the film for you.

The visuals (especially in the dream world) are all beautifully thought-out. Instead of trying to create huge new landscapes (this is not Avatar), instead we’re offered bizarre twists on things that are already familiar to us. In fact, a lot of the locations to the films look quite ordinary, so when something unusual appears on screen, the effect is striking and eye-popping. Combine that with the fluid camera-work (always gorgeous to look at), and on the IMAX screen, the effect is totally immersive. When you add in the editing and Hans Zimmer’s relentless “two chords with ostinato” score, then you’re not going to get bored at all.

And, yes, all those reports that you will want to see it more than once are true – anyone want to go again?

To make a change from all the silent films I’d been watching because of the infamous 1001 Films to Guilt You Before You Die book, I thought I’d skip to the tail end of the book and work backwards for a bit. (It’s also a lot easier to get hold of films made a few years ago.) So Volver (Return or Coming Back) was the film right up the tail end, so that’s where I ended up.

This is directed by Pedro Almodóvar, the quite-famous Spanish director. That said, I’ve only seen one of his films before, called Talk To Her, and while I could admire the craft of that one, there were several sequences which were just a bit too much for me.

Volver is a bit more mainstream, though that said, it would be unusual to see this kind of film come out of the Hollywood system. It opens with a shot of a cemetery in La Mancha, a notoriously windy (and I mean windy) region of Spain, and the graveyard is full of women cleaning and polishing graves. These three themes (women, death and wind) pretty much form the basis of the entire film.

This is an ensemble cast of nearly entirely women. The two main characters are the independent Raimunda (Penélope Cruz) and the much meeker Sole (Lola Dueñas), sisters living in Madrid – both of them struggling with the fact that the men in their life just aren’t any good. In Sole’s case, her husband deserted her a long time ago and, in Raimunda’s case, she has a husband – but he is an unemployed bum with a roving eye. As well as the contrast between these two women, the film constantly contrasts the two locations these women have inhabited – Madrid, where everything is modern, but where women feel isolated and lonely – and La Mancha, where the women band together with an incredible solidarity and look after one another. (This is exemplified by the secondary but important character of Agustina (Blanca Portillo), a friend of their mother’s who lives in La Mancha and “checks in” every day on how their elderly aunt is going.) While Raimunda and Sole haven’t had much luck with their love lives, they think fondly about their mother, who died in a fire three years before – in the arms of her husband.

Up until then, the story (which I confess I didn’t know a lot about – I don’t remember hearing much more than the title of this film when it was released) is rather conventional, but then two things suddenly happen which set things in motion: first, Raimunda’s husband dies under circumstances which leave her with tough choices to make and, secondly, Sole comes back from a funeral in La Mancha only to find her dead mother has stowed away in the boot of her car and wants to come and live with her.

I won’t say any more than that, but what unfolds is less a story and more an exploration of themes – women looking out for each other, loneliness, betrayal, death and its effect on people, secrets, similarities between past and present and a complete absence of any decent men on the scene.

This film rather successfully passes the Bechdel test, which I read about on my friend cafedave’s blog, which means simply that the film has to: a. feature two women, b. talking to one another c. not about men. When I first read about that test, I realised how little of that there is in modern film (certainly in mainstream Hollywood fare), so it was quite refreshing to watch something in a foreign language about a different culture featuring women. And certainly, the most astonishing revelation of the film is Penélope Cruz. In anything I’ve seen her in, she’s always come across as this kind of irritating character with a strong accent who’s only claim to fame was stealing Tom Cruise from Nicole Kidman. However, as the character of Raimunda, she absolutely glows on the screen.

I think what I found most disturbing, in the end, however, was what this film seemed to be saying about men. Now, I understand, the fact that men are all love rats in this film is just this story and not reality, but it certainly felt that way. I know that Almodóvar has said that this film is very much a homage to the women in his life when he was young. What is unspoken, in all of the reviews I’ve seen or any of the DVD interviews – is that if these are what the women were like that he grew up around – what does that say about the men that he knew when he was a boy?

4 out of 5 if you’re into arthouse cinema.